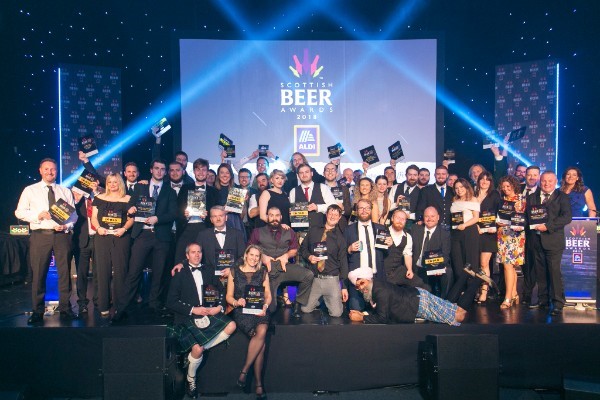 The winners of the 3rd annual Scottish Beer Awards have been revealed at the biggest ever celebration of Scottish brewing held in Edinburgh last night.

Nearly 400 guests from across the UK brewing industry gathered to hear news on award winners after a wide-ranging competition which has been running since February. Awards were presented for both business performance and taste after 296 Scottish beers were presented into the blind tasting competition.

Edinburgh’s Stewart Brewing were presented with the ultimate award of the night, Scottish Brewery of the Year, after a phenomenal year of growth in turnover, exports and product development. Stewart Brewing also walked away with awards for Growth Business of the Year and two taste award medals for their Corpse Reviver and Cascadian beers.

However, it was Fierce Beer from Aberdeen who triumphed in the hotly contended taste awards, winning a total of 4 gold medals and one silver medal. 2017 champions, BrewDog enjoyed further success this year winning a total of 6 medals in the IPA, Barrel Aged, Stout and Amplified Beers categories.

“Now in its third year, the Scottish Beer Awards is an eagerly awaited celebration firmly fixed in the UK brewing calendar. With a proven record of inclusivity and collaboration across the whole sector, these awards are truly representative of an exciting industry making first class products. To see so many breweries, both large and small, triumph this evening is hugely encouraging and a sign of the growing success of Scottish companies in the world of brewing.”

This year’s competition saw the introduction of a new category, created in collaboration with headline sponsors, ALDI to recognise emerging talent. The Emerging Brewer of the Year Award was presented to Jonathan Robinson of Innis & Gunn who was praised by the judging panel for his passion and commitment to the sector and specifically towards his role as a young brewer in a rapidly growing business.

Graham Nicolson, Group Buying Director, ALDI Scotland, commented:
“We’re hugely proud to have been headline sponsors of the Scottish Beer Awards since 2016 and privileged to work with so many of the breweries recognised at the awards this evening. The popularity of Scottish beer continues to grow, and we are pleased to be a part of such an exciting time for the Scottish brewing sector.

“The quality of beer being produced in Scotland continues to be second to none and the industry offers some exceptional career prospects for young people. We extend our congratulations to the winner of the emerging brewer award and wish Jonathan from Innis & Gunn every success in his future career.”