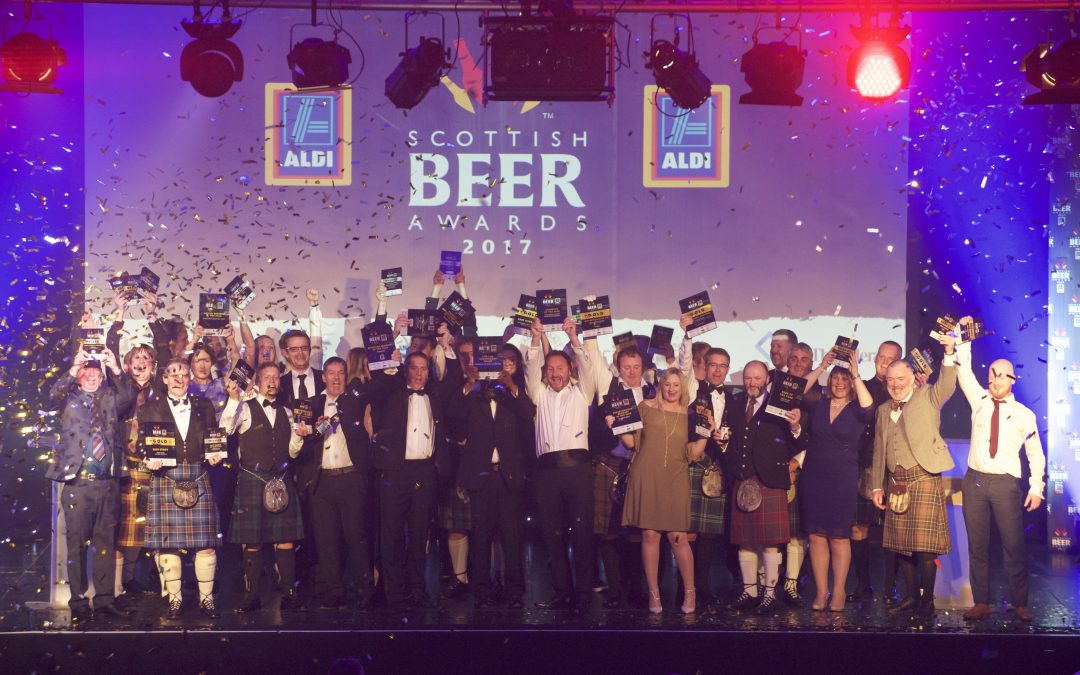 The best beers brewed in Scotland have been revealed following the 2nd annual Scottish Beer Awards, sponsored by ALDI and held in Edinburgh last night.

Over 350 guests from across the brewing industry gathered from across the country to hear who had been crowned the best after a wide ranging competition which has been running since March of this year.

The top award of the night, Scottish Brewery of the Year, was presented to Brewdog after the judges praised them for a monumental year of business.   The Ellon-based business fought off four other breweries for the title after persuading the panel of their success in launching a US-based brewery and also completing a deal to sell off 22% of the business to a private equity house.

However, it was the news of winners in 11 coveted taste categories which were most eagerly anticipated.  With 266 beers tasted blind by one of the largest and most experienced judging panels in the history of beer competitions in the UK, the results have become a highly respected measure of beer taste and quality.

Innis & Gunn scored both Gold and Silver medal positions in Best Barrel Aged Beer for I & G Rum Finish and I & G Original respectively.  They also collected awards in the business categories winning Excellence in Marketing and Exporter of the Year.

Other gold winners included newcomer The Ferry Brewery for Ferry Stout, Fallen Brewing for Grapevine in the popular Pale Ale category and Drygate for their mango infused beer, Disco Forklift.

Stewart Brewing picked up the Gold for They’re Coming to Get Rhu Barbara in the new Sours category while the Co-Founder, Steve Stewart, was also awarded Master Brewer of the Year.  Spey Valley Brewery received a Gold medal in Best British Style Ale for David’s Not So Bitter.

Aberdeen’s Fierce Beer, which launched in 2016, was awarded Breakthrough Brewery of the Year and also picked up the gold medal in Best Porter for Café Racer which went on to win the judges prize for Beer of the Year.   Their neighbours and mentors BrewDog collected two silver medals for Elvis Juice and Jet-Black Heart.

It was an evening which united the whole brewing industry in a positive way and there was unanimous support and a standing ovation when one of the industry’s greatest legends, Professor Sir Geoff Palmer OBE, collected the honour of Lifetime Achievement Award presented by his former student, Dr Dawn Maskell of Heriot Watt University.

“Whether breweries are large, small, independently owned or have attracted investment from elsewhere, the Scottish Beer Awards is for everyone brewing in Scotland.  We unite in our congratulations of our winners and celebrate the success of the whole of Scottish brewing.  I hope all our winners find future success with their medals and show the world how brilliant we are in Scotland at making great beer.”

“The quality of beer produced in Scotland is exceptional and we would like to congratulate everyone involved in this celebration of Scotland’s amazing brewing industry.  We’re hugely proud to sponsor the Scottish Beer Awards for the second year running and to have worked with so many of the breweries recognised at these awards.  The popularity of Scottish beer shows no signs of slowing down and we’re looking forward to seeing what’s next for the sector in Scotland.”

SCOTTISH BREWERY OF THE YEAR

BEER OF THE YEAR

MASTER BREWER OF THE YEAR

BREAKTHROUGH BREWERY OF THE YEAR

INNOVATION OF THE YEAR

GROWTH BUSINESS OF THE YEAR

PRODUCT DEVELOPMENT TEAM OF THE YEAR

EXPORTER OF THE YEAR

BEER DESTINATION OF THE YEAR

BEER BAR OF THE YEAR