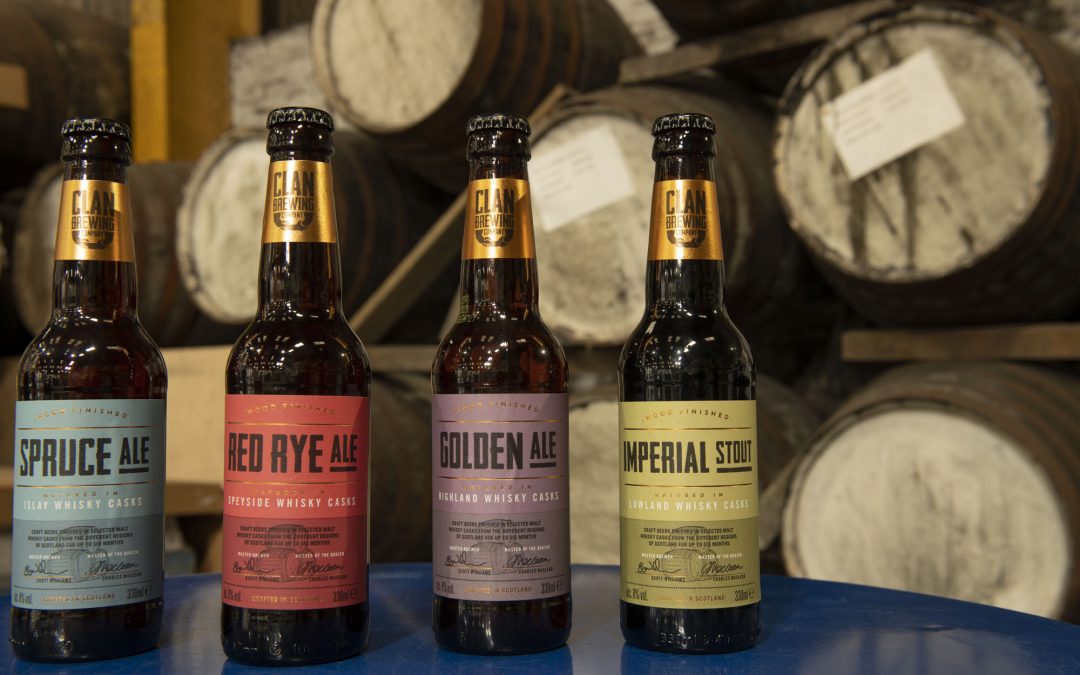 A Glasgow beer company has triumphed at the European Beer Challenge after all four of its innovative whisky beers won acclaim from some of the world’s most influential beer buyers and tasters.

The Clan Brewing Co won a double gold, two golds and a silver for its range of whisky beers at the European Beer Challenge, regarded as Europe’s most important beer competition.

The event sees hundreds of breweries from across the continent take part in a series of taste tests judged by 100 industry experts in Knightsbridge, London.

The Clan Brewing Company’s Imperial Stout won a double gold in the Imperial Russian Stout category, impressing judges for it intense flavours of coffee, lemon, sweet sherry and raisin, derived from its time aged in Lowland whisky casks. The Clan Brewing Co’s other beers also won medals, with the Red Rye and Spruce ales each winning a gold, and its Golden Ale taking silver. Each of the beers is aged in regional whisky cask hand-selected to complement the beer’s flavour.

“This is a hugely exciting development for the Clan Brewing Co, and a much deserved acknowledgement for the brewing mastery and whisky expertise that goes into creating these distinctive and world-class beers.

“The Clan was formed by a desire to collaborate to show off the best of Scottish brewing and distilling, and it’s fantastic to see the Clan Brewing beers achieve this level of acclaim from 100 of the world’s most influential beer experts.”

Mr Miller, who is widely credited with pioneering the distinctive whisky beer style during his time at Harviestoun with the Ola Dubh range, added:

“These four beers – an IPA, a golden ale, red rye and imperial stout – show off the mastery of Scottish craft brewing and distilling. They’re products of our innovation, outlook and collaborative approach.”

Mr Miller said both Mr Williams and Mr MacLean had played a key role in the development of the unique beers, which are aged in whisky barrels following the fermentation process. Mr Williams tailored the beer recipes to match the profiles of the second-fill whisky casks which were hand-selected by consultant Mr MacLean, Master of the Quaich and the author of 18 whisky books. The beers pair four different beer styles with distinct whisky regions – Islay, Lowland, Highland and Speyside.

The awards win comes after the Clan Brewing Co launched its whisky beers in the US following a distribution deal in the States, a market that is notoriously difficult to enter.

Earlier this year, the Clan Brewing Co was showcased at the Hofex and Gulfood food and drink events in Hong Kong and Dubai, which were attended by tens of thousands of food and drink experts and buyers from Asia and the Middle East.

“These gold and silver prizes are a superb finish to the year, which has seen orders come in from Asia, North America, the Middle East and Europe.”

“Whisky barrel-aged beers is a style that has over the past 20 years won a lot of attention and interest, especially with this latest recognition at the European Beer Awards. With our close connections to key distilleries, through Charles MacLean, and exceptional brewing talent through Scott Williams, these beers demonstrate the authenticity, provenance and quality of Scottish craft produce that’s so important to consumers.”