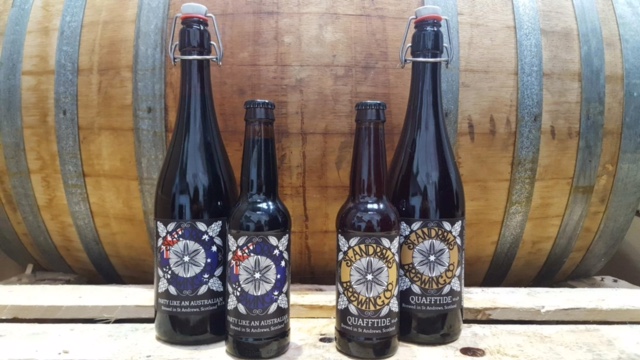 In 2016, the St Andrews Brewing Co sourced some peculiar and rare barrels to be filled with unusual and interesting beers. The company sourced two Speyside malt whisky casks, one of which was originally filled with Heaven Hills bourbon back in 1971.

The other casks were sourced from Coume del Mas winery in Banyuls, a small region in the Roussillon in Languedoc, south west France. These casks had been used for three consecutive vintages to age Galateo, a sweet red fortified wine made from old-vine Grenache Noir.

After the usual quarrels, disagreements and differences of opinions that brewers have, we decided to age the brewery’s 500th brew in the whisky casks, and that beer would be a traditional British IPA, dry-hopped with Kentish Golding hops. And for the Banyuls barrels, we would brew a Russian Imperial Stout to absorb the berry flavours from the previously contained fortified wine.

After ageing for 11 months, the IPA has now been racked off and bottled with a final ABV of 10.4% with stronger malt characteristics than modern American Style IPAs. The evidence of the whisky is clear with delicious smoky notes, a mellow whisky warmth and a substantial increase in the strength of the beer during its barrel-aging, having started off with a strength of 7.5%.

Simon Tardivel, Brewery Manager at the St Andrews Brewery, commented: “This was a very stressful time for us in the brewery as every time we tried the beer, it tasted better than before and we were constantly worried that it would go off. When we eventually found time to empty the two casks, we married them together and Quafftide was born.”

The name “Quafftide” features in Mark Forsyth’s ‘The Horologicon’ and is a fitting title as it means “the season for drinking.”

The Russian Imperial Stout was brewed to 7.5%. Having been aged for 10 months, the ABV of Party like an Australian now sits at 8.1%.

“During its ageing process, Party like an Australian has absorbed notes of berry fruits, liquorice, treacle, oak and a vinous quality, a pleasant change from the many whisky heavy barrel aged stouts on the market.”
Russian Imperial Stouts were the preferred choice of our former Sales Manager and Brew Pub Manager, Tom Holt, who was tragically killed in a car accident in February this year. Prior to its naming, this was one of Tom Holt’s favourite beers when tested straight from the barrel for “quality control”. This beer is named in Tom’s honour.