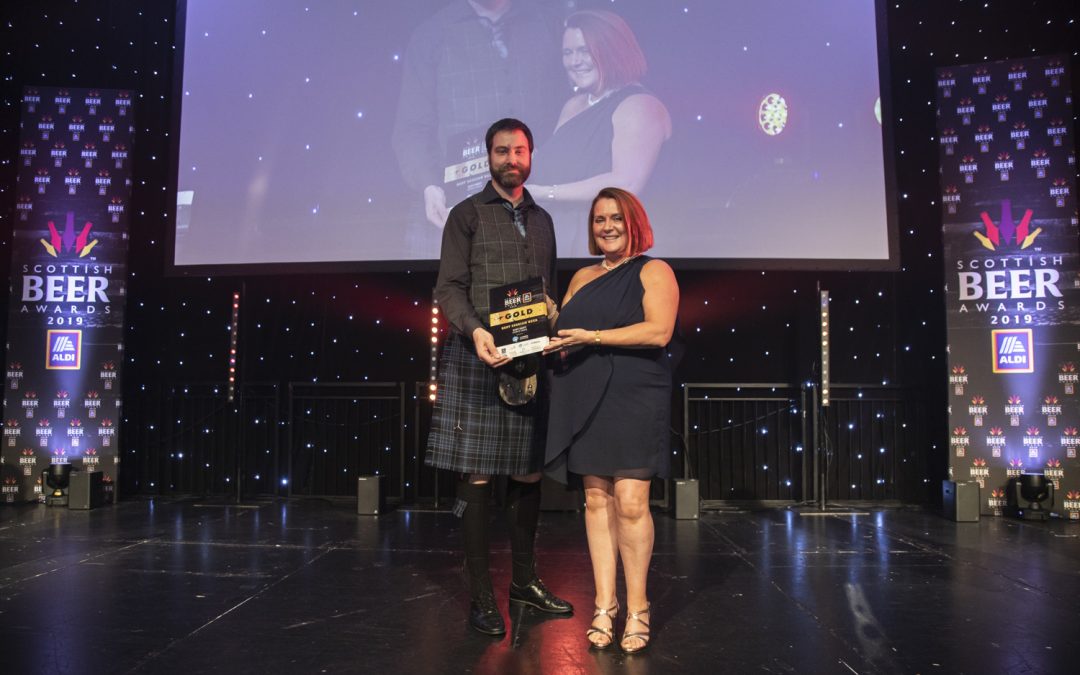 The national awards programme for Scottish brewing has revealed the best brewing businesses and products in its 4th annual competition.

Edinburgh-based Stewart Brewing was crowned Scottish Brewery of the Year for the second consecutive year after achieving a record year of business growth in turnover, exports and product development.

The independent brewery was also presented with the Exporter of the Year and Product Development Team of the Year awards, as well as taking away a gold and two silver medals in the taste competition.

They were followed closely by Fierce Beer who triumphed in the taste awards again this year taking home 8 taste medals, including three gold medals. There was also recognition for their head brewer, Dominique Bongers, who collected the coveted Brewer of the Year award after the judging panel specifically recognised her knowledge, innovation and skills only one year into the job.

Brewing giants BrewDog collected the top taste award of the night, Beer of the Year, for their Sleekit Sour beer. They also collected five gold medals, one silver and two bronze medals, including all 3 medals in the sour beer category following the launch of BrewDog Overworks sours plant earlier this year.
Over 350 people celebrated at the annual fixture for the brewing industry which followed a trade show and conference with speakers from the USA and Germany.

“The Scottish Beer Awards is now a firm fixture in the Scottish Brewing calendar. It is encouraging to see the sector’s continued growth and to welcome both newcomers and well-established brewers into this independent and well-respected event. 2019’s competition has again showcased the first-class products that are being brewed right here in Scotland, as well as recognising some impressive business achievements of the great people who make up our industry. On behalf of the judging panel, I extend many congratulations to all the winners and finalists in this year’s competition.”

“We are proud to be headline sponsors of the Scottish Beer Awards for the 4th consecutive year and are privileged to work with so many of the Scottish breweries recognised at this year’s awards. Scottish beer continues in its popularity and in our 25th year of having a presence in Scotland, we are especially pleased to be a part of the ongoing success of the Scottish brewing sector and look forward to working in partnership with more breweries than ever.

“The quality of beer being produced in Scotland continues to be amongst the best in the world. We congratulate this year’s winner of the Beer of the Year award, BrewDog OverWorks, along with all finalists and very worthy winners this evening.”

Other winners on the night included newcomers from Dundee, 71 Brewing who were presented with the judges award for Breakthrough Brewery, Best Beer Experience and 3 taste awards for their Pale Ale Cloud Fall, Neipa Here Nor There beer and Dundonian Pilsner.

The awards were also a fundraiser for two charities; The BEN, the Benevolent Society of the Licensed Trade of Scotland and the My Name’5 Doddie Foundation, set up by rugby legend Doddie Weir to help improve the lives of those affected by Motor Neurone Disease.

THE WINNERS IN FULL
Business Awards