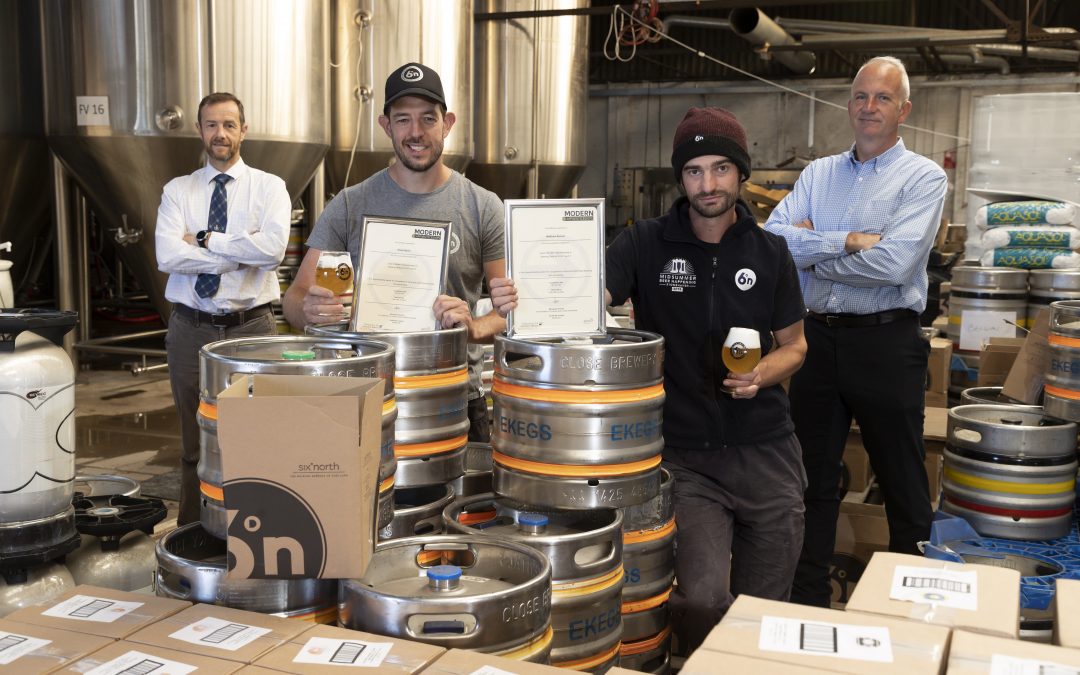 Scotland’s food and drink industry is raising a glass to cheer the successful completion of the country’s first accredited Modern Apprenticeships in Brewing Skills.

Stuart Byers and Matthew Bennett, who work at Six Degrees North brewery in Laurencekirk, are now uniquely SVQ-qualified in one of the world’s oldest industries.

Craft Skills Scotland is the first training provider in Scotland approved to deliver the apprenticeships, approved by the Scottish Qualifications Authority and funded by Skills Development Scotland.

Claire Simpson, Training Manager with Craft Skills Scotland, said Stuart and Matthew were just the first in a pipeline of apprentices from Orkney to the Borders being trained as brewing craftsmen in consultation with the Scottish brewing industry.

“This Modern Apprenticeship has been drawn up to meet the needs of all brewers – from micro-businesses to major employers.

“Stuart and Matthew’s success is testament to their own hard work and efforts as well as the full support they received from their employers,” she said. “They have displayed an exceptional passion for their chosen profession and are the perfect examples of individuals continuing traditional artisan skills in a modern world.”

This qualification is designed for candidates who are working in a craft brewery environment and looking to develop their existing skills and knowledge.

This week, a delighted Stuart (35) and Matthew (35), both from Stonehaven, received their certificates for their unique achievement.

“It’s been a tough course but really rewarding,” said Stuart “We’re chuffed to get our qualification.

“I would never have studied full-time at university so to be able to gain a qualification while working and earning is a fantastic option. It will prove popular with other men and women in the trade.”

Matthew explained that their role involved working in every part of the brewing process – from taking delivery of the raw ingredients to signing off the final product – at the craft brewery where 20 different beers are produced.

“I felt I knew how to brew, having learned on the job,” he said, “but to study and gain a qualification to say that I do officially feels great.

“This apprenticeship allows you to study in your own time and doesn’t detract from your day-to-day learning experience on the job.”

Breweries sustain more than 8,500 jobs in Scotland and Gerry McBride, Food & Drink Sector Manger at Skills Development Scotland (SDS), said that completion by the first cohort of modern apprentices in brewing represented an exciting step and a real boost for the industry at a critical time.

“Now more than ever,” he said, “it’s important that employers and individuals have access to the right training and qualifications to help them navigate the challenges of COVID-19, but also be equipped with the skills needed for the future.”

The Brewing Skills apprenticeship programme is the latest step by food and drink producers to attract talent, a priority outlined in Scotland Food & Drink’s Ambition 2030 strategy which aims to join up industry and education to promote the benefits of working in the sector to those leaving school.

“Brewing is one of the oldest industries in Scotland with a strong provenance and reputation going back centuries. It is great to see the first two apprentices complete their Modern Apprenticeship and join this rewarding industry.

“We hope it encourages more young people to consider an apprenticeship in brewing as a contemporary alternative to more traditional further education, providing a springboard to a long-term career.”

“The brewing sector in Scotland – particularly craft breweries such as Six Degrees North in Laurencekirk – has seen a huge level of growth in recent years.

“The Brewing Skills SVQ gives employers an opportunity to support their staff, which is needed now more than ever as we continue on the road out of lockdown. But importantly, the course also gives employees at breweries the chance to demonstrate their skills and knowledge, get qualified, and develop their careers in Scotland’s vibrant food and drink industry.”