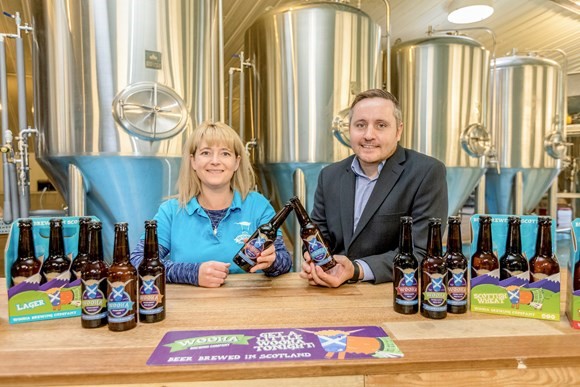 A Moray brewery has set up a new base at a site in Kinloss as it expands to meet growing demand for its beer from new international markets.

Four new jobs have already been created at WooHa Brewing Company Ltd as a result of the development.

A 6.2 acre site at Upper Hempriggs, Kinloss has been purchased by the company and a grant of £133,300 from Highlands and Islands Enterprise (HIE) is secured to help establish the new brewery.

Having reached production capacity at its previous site at Balmakeith Industrial Estate in Nairn, the new site will result in an increase of five-fold capacity and allows the company to expand in line with growing demand.

WooHa Brewing was set up by Heather McDonald in 2015 when it launched its Lager and Porter, and this was soon followed by the Wheat and IPA.

The £692,000 expansion project will help WooHa Brewing to realise its international ambitions while continuing to expand its customer base across Scotland and the UK.

Scott McKnockiter, account manager at HIE’s area team in Moray, said: “Plans for further expansion over the years will create more job opportunities and contribute to Moray’s economy. This exciting new brewery adds to the rich variety and high quality food and drink offering throughout the area.

“We have been closely involved with the business since its inception and we are delighted to be able to help WooHa in its ambitious plans to expand internationally.”

In addition, HIE has assisted with a Go Global grant towards an international sales and marketing plan to help the company adapt label designs for bottle carry packs for the global market.

The development agency also supported this international plan by assisting the company to attend the New York ‘Taste and Trade Show’ in 2015 where it won a Bronze award for its WooHa Porter, a Silver award for its WooHa IPA and it was topped off as being ‘Scotland Brewery of the Year’ by the judges. More awards have also been added over the past two years.

Managing director of WooHa Brewing, Heather McDonald, said: “HIE has been instrumental in our growth plans. We have had an amazing first two years of trading which has resulted in our need for more space and HIE has provided considerable support to allow us to achieve this move. It’s been hard work and we are grateful to many people who have encouraged us along the way.”