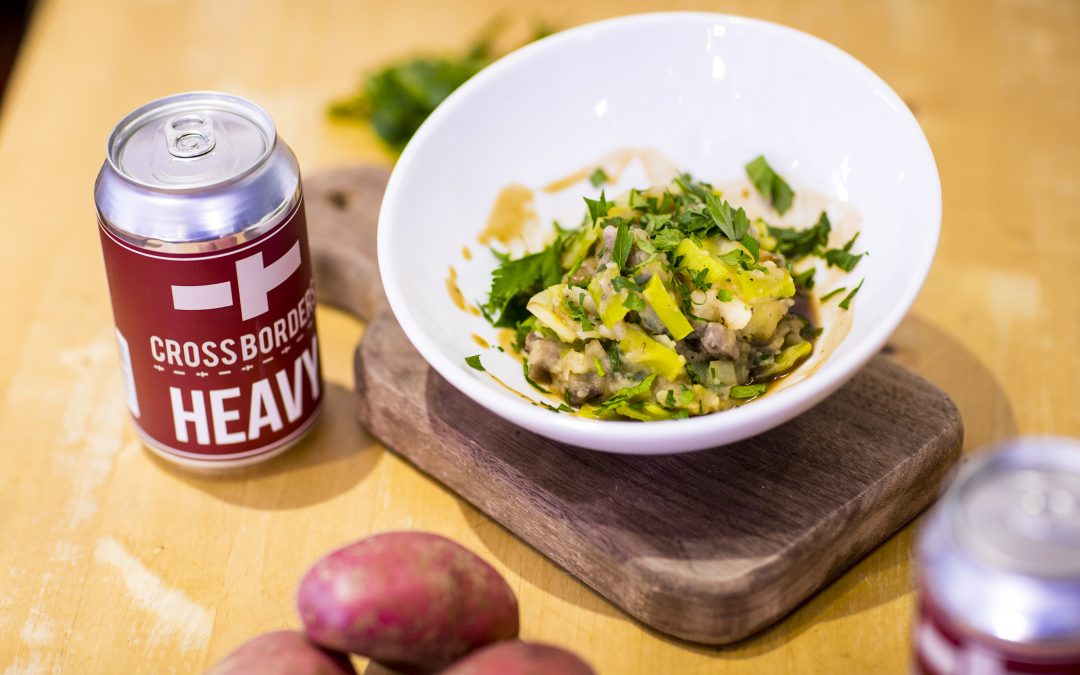 The joint initiative was launched by Quality Meat Scotland (QMS), The Brewers Association of Scotland (TBAS) and Scotland Food & Drink at an event in Glasgow this week.

Justin and Jamie chose a selection of very different dishes – traditional and modern – to highlight just how well craft beer and beef, lamb and pork work together.

These included Scotch Beef rib-eye stovies with crisped onions, a traditional favourite which was paired with the rich and malty Cross Borders Heavy; slow braised Scotch Lamb neck with orange, feta and olives which was teamed up with the deliciously hoppy Pale Keith by Keith Brewery, with its notes of exotic fruits and lime; and Specially Selected Pork fillet with Dijon lentils and aioli was married up with Top Out Brewery’s South Face, a rich, red IPA.

Jamie and Justin said that working together to pair the meat dishes with the craft beers had been great fun and a real taste sensation adventure.

“We worked closely with Jamie on this menu to find the right flavours to complement each course. We weren’t just interested in how the beers work with the dishes as a whole but how the individual ingredients in each beer and dish impacted one another,” said Justin.

And Jamie pointed out that the range of beers offered by members of TBAS, which is open to all Scottish-owned breweries, offers an exceptional selection of craft beers to choose – each with its own special characteristics to enjoy.

“The joy of discovering craft beers is the extreme diversity, with flavour profiles which vary from one end of the spectrum to the other,” said Jamie.

“There are no hard or fast rules to pairing the meat with beer but some matches do work better than others and by experimenting with different options people will find a side of the palate they may never have experience before.”

“Farmers and brewers work very hard to produce top quality beef, lamb and pork and beer and there could be no better way of celebrating Scotland’s larder on St Andrew’s Day than by celebrating both in this way,” she said.

“This has been a fantastic collaborative project to work on with The Brewers Association of Scotland and Scotland Food & Drink. Our thanks to Justin and Jamie for working so successfully together to create thee fantastic #Meat4Beer pairing suggestions.

“We hope that others will take their lead and have fun discovering their own favourite combinations of craft beer and Scotch Beef, Scotch Lamb and Specially Selected Pork.”

TBAS has recently joined forces with Scotland Food & Drink (SF&D) – while retaining its independence and autonomy – meaning that any TBAS member can also access all the benefits of SF&D membership.

“Run by brewers for brewers, TBAS exists to grow the value and reputation of the Scottish brewing industry. Part of this work is to encourage people to be creative with their choice of drink at mealtimes, there are amazing new Scottish beers and breweries available for consumers to try. Throughout the evening, we featured a number of delicious beers which were paired with incredible Scotch meats, a fantastic collaboration between TBAS and Quality Meat Scotland”.

TBAS encouraged those keen to explore which beers they’d like to try next to have a look at The Brewers Association of Scotland Map, www.tbas.scot.

For first-rate recipe inspiration for your own St Andrew’s Day dinner, visit www.ScotchKitchen.com.