Leading Scottish craft brewer, Stewart Brewing, has announced that their popular ale – Edinburgh Festival – is back by popular demand to quench festival goers thirst this August.

Named after the world-famous festival, Edinburgh Festival is a fantastic session ale with a hint of something different for August. At 3.9%, it’s light in colour with a gentle, refreshing bitterness. A liberal dose of New Zealand hops gives the beer a citrus and pine aroma – perfect for taking in the festival. 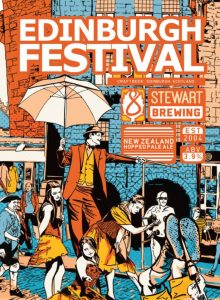 Stewart Brewing will also take up residence at the Pleasance Courtyard and Teviot Square this year, alongside Williams Brothers and Drygate Brewery, serving a selection of their popular craft beers. The brewery’s famous Edinburgh Gold will also be served at the Edinburgh International Book Festival for the third year running, while various festival pop-ups will also stock Stewart Brewing favourites.

Jo Stewart, Stewart Brewing co-founder, commented: “We’re all getting excited for the festival and we’re thrilled that our Edinburgh Festival ale will be available again this year. It’s proved really popular with festival goers in previous years so we thought we’d bring it back to avoid any disappointment.

“As an Edinburgh brewer, we’re really proud to be involved in the festival, particularly as it celebrates its 70th anniversary, and hope it’s another fantastic year for everyone.”