Dalkeith-based brewery, Cross Borders Brewing Company, is set to launch a new beer in collaboration with the Bill McLaren Foundation. The beer, a 4.2% ABV session IPA built around Bairds Malt all Scottish Pale Ale Malt, will be available from July in pubs across the UK, as well as 330ml craft cans in selected Scotmid stores and independent retailers.

Bill McLaren represented all that is best about rugby union. A former PE teacher and journalist with a passion for rugby, Bill is without doubt one of the most loved and recognisable sport commentators of his time. Renowned throughout the sport, his familiar tone and imaginative phrasing earned him the title “The Voice of Rugby”. In his honour, the Brewery has selected some of their favourite Bill McLaren quotes to appear on the beer cans. 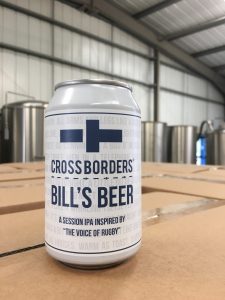 Gary Munckton, Director and Founder of Cross Borders Brewing Company said, “As passionate rugby fans who both grew up listening to Bill’s legendary commentary, Jonny and I were delighted to have been given the opportunity to produce a beer in Bill’s name. We hope we’ve done Bill’s legacy proud with the beer we’ve produced and look forward to continuing our partnership with the foundation in the months and years to come.”

The Bill McLaren Foundation was established in 2010, with Bill’s blessing and the support of his family, to help improve lives through rugby and inspire youngsters to achieve their personal best. The Foundation aims to support individuals and organisations to actively promote and develop rugby union and its values, and to help provide opportunities for youngsters in sport.

Alan Lawson, Bill McLaren’s son in law said, “The charity is delighted to be working with Gary and Jonny from Cross Borders Brewing Company. The beer is a great addition to the Cross Borders list of beers and hopefully will be a great success wherever it is marketed.“

Cross Borders Brewing Company will donate a portion of the sales proceeds of every can, keg and cask of Bill’s beer sold to The Bill McLaren Foundation. Drinking great beer and supporting a fantastic cause at the same time, what’s not to love?