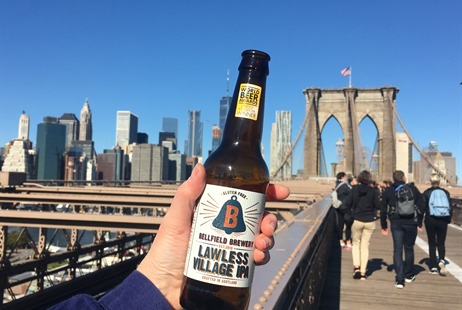 Bellfield, the Scottish gluten-free microbrewery, has this week secured a listing with a multiple retailer in Singapore.

The new listing will see the Scottish brewery’s beers on sale in 23 branches of NTUC FairPrice Finest supermarkets from next month, thanks to a deal struck by agent, Gain Brands International.

The listing comes hot on the heels of live tenders in Sweden and in Canada as well as the setting up of distribution agreements in Norway , Finland, the UAE and France.

The distribution agreements are clear evidence of a growing international demand for the brewery’s award-winning, gluten-free beers..

Bellfield launched its first two beers in March 2016 and is now exporting to the Netherlands, Malta, Singapore and Switzerland, with an agency agreement in place in Canada.

Speaking about the new listing and agency agreements, Bob Hogg, International Market Development Manager for Bellfield, said the beers have been well received internationally. He said, “We have had great support from Scottish Development International that’s helped us to secure distribution agreements in key growth markets, where we see significant potential for volume sales.

“We also have a number of active tenders among the world’s largest alcohol buyers – Systembolaget in Sweden and LCBO in Canada – which we believe will lead to significant new business.”

Speaking about the microbrewery’s ambitious growth plans, Alistair Brown, Founder and Director said, “We’ve already delivered our ambition to produce gluten-free beer that stands up to anything in the market.

“Our aim is to become the leading gluten-free brewery in the world, producing great -tasting beers that everyone can enjoy.

“Now we are seeking additional resources to target more customers especially in London and overseas and to make several key hires.”

This summer the brewery placed an order for a new 12 barrel (2,000 litre), turn-key brew plant that is now being fabricated and will be installed at its premises in Abbeyhill, Edinburgh in December 2018.

Next month, Bellfield will visit the USA, to take forward ongoing discussions with distributors, retail groups and sales & marketing agencies and will launch a partnership with a leading US importer.